IS WHAT we’re witnessing in the US a slow-motion downhill slide into a coup?

A fascinating and scary article has been doing the rounds in recent days, which suggests that Donald Trump’s ban on immigration from seven Muslim-majority countries was an attempt to see how far he can push his power, as the first step to mounting an all-out coup.

A Google engineer named Yonatan Zunger has suggested that the way the White House has repeatedly gone around long standing conventions shows it is testing to see whether a coup is possible.

One man’s coup is another man’s “strong leadership”. But what Zunger is talking about is Mr Trump’s inner circle grabbing power in a similar way that Vladimir Putin has done in Russia, where he exercises power unchallenged by any other body.

Sure, he still has a court system and a legislative body, but they are largely irrelevant, and Mr Putin would ignore them if they ever opposed him.

Zunger’s point is that last weekend the White House and Department of Homeland Security happily ignored court orders related to the Muslim ban, and there was no real consequence to it.

This is normally accompanied by a Kleptocratic approach to the nation’s finances. Kleptocracy is “rule by thieves”. The argument that Zunger presents is that Mr Trump’s refusal to divest himself of assets shows a proclivity to use the office to enrich himself and his family.

But coup or not, Zunger has identified some tendencies in Mr Trump’s leadership style are worth exploring.

In the weeks since his inauguration, Mr Trump has repeatedly projected his power without being challenged by going around all the normal processes. The most visible — and trivial — example of this is Mr Trump’s use of Twitter.

Mr Trump’s tweets about his conversation with Prime Minister ‘Trumble’ stomped on centuries of diplomatic protocol. And he uses Twitter every day to get his message out unchallenged by the questioning (and fact-checking) of the press. Don’t get me wrong — it’s spectacular to watch — but it shows in Mr Trump a desire to be unchallenged and unmediated by the normal processes of government — whether they’re diplomatic protocols or scrutiny by the media.

If it were just his tweets, that would be one thing, but he’s taking the same approach across the board.

Normally, when a President gets into power, he rushes to appoint the roughly 660 senior officials that need approval from Congress. That’s because he’s hoping to get the departments (which employ millions of people) working according to his agenda.

Indeed, for centuries, that’s been the main prize of winning the presidency. You get to set the agenda for how millions of Americans administer the government.

Instead, Mr Trump only named 29 appointees by the time he was inaugurated. Twenty nine out of 660.

In one light, you could argue that this shows that Mr Trump and his inner circle are just deeply incompetent. But you could also consider another possibility — that on the whole, Mr Trump doesn’t care that much about who runs the bureaucracy, because that’s not how he’s planning on projecting his power.

It’s now becoming clear that the supposed “mass resignations” of nearly all of the senior staff at the State Department was a purge ordered by the White House. Look at the chart that Emily Gorcenski tweeted around. That’s not an orderly transition. That’s a wipe-out. 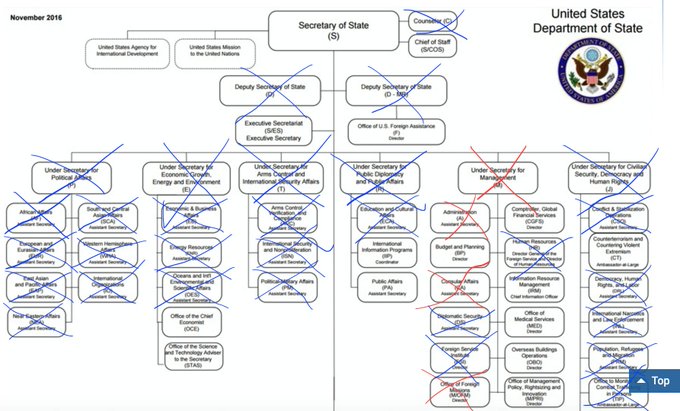 Many commentators have lamented the purge means that it will be months — if not years — before the State Department has an effective leadership at the top of it that allows it to participate in Federal policy decisions.

But if you follow Zunger’s thinking, perhaps that’s the intention.

The purge happened the day before Mr Trump announced his ban on immigration from seven Muslim countries, a ban which many in the State Department would have reflexively opposed. By taking out the State Department, he was able to exercise his power unchallenged.

Clearly certain parts of that order were unconstitutional. At least three judges in the US have now ruled against it, and if it ever gets in front of the Supreme Court, there is a case that it breaches the US Constitution’s values of equal protection and religious freedom.

But even with a neutered State Department, if Mr Trump had run the Order by the Department of Homeland Security and the Attorney General, the Order would have been neutered out of all its blustery impact.

Instead, by going around the normal process of checks and balances, it worked. Sure, various courts around the US ordered stays on some provisions in the Order, but the Order’s intent — to keep people from seven countries from entering the United States — remains in place.

By finding ways to exercise power unchallenged, Mr Trump’s inner circle were able to enact an unconstitutional order. And the only lesson that they derived from it is that it actually doesn’t matter how unconstitutional something they do is, as long as they go around the Departments that will object, they can get it done.

The list goes on. Mr Trump issued an extraordinary 20 executive orders in his first 10 days. If you read through them, they are hilariously amateurish in their drafting.

I know this sounds like a joke, but one of the orders — honestly — declared the day of his inauguration The National Day of Patriotic Devotion. I’m not making it up. The Order itself reads like a decree from Kim Jong Un. We’re not making this stuff up.

As you read through them, it becomes clear they have not gone through the conventional methods for drafting executive orders — which involves showing them to the relevant department for input. At times they are vague, at other times the wording is flowery. They are not the work of experts.

The White House has confirmed to multiple reporters that they have been drafted by Mr Trump’s inner circle, and released without any input from the Departments that are expected to carry them out.

Again, this might be incompetence — many of his inner circle have no previous experience in government. But it might also be they simply don’t care about what the Departments think about his orders. Or worse, they know exactly what they think, and are seeking ways to avoid that scrutiny.

Properly gauging how Mr Trump is exercising his power is important because many of those who oppose Mr Trump are still in a state of denial that he is really behaving in this way.

The insider analysis is still largely that the institutions of Congress, the Court System, and even the bureaucratic procedures of the Departments, will place roadblocks around Mr Trump.

But what no-one seems to realise is that these institutions are not set up to deal with being circumnavigated, especially not by someone as powerful as a President.

And where it starts getting into coup territory is when you realise that he’s even sidelined the US Military from the normal processes in recent weeks.

Take, for example, the most powerful body in the US Military hierarchy: the Joint Chiefs of Staff. These are the seven top leaders of all four arms of the military. On Monday, Mr Trump pulled the Joint Chiefs’ representative off the top committee of the National Security Council, and instead appointed his civilian adviser (and far-right nationalist) Steve Bannon to run the committee. Now the military has no permanent member on the committee which directs national security decisions.

This is unprecedented. Nobody ever thought that a President would go around the back of a Department or the Military, simply because, being President, the Department and the Military is formally already his to control.

But if Mr Trump is prepared to go around his departments and media, ignore diplomatic protocols and sideline the US Military, will he really obey the will of Congress and the Supreme Court when they start trying to put limits on his power?

What it means is that much of the conventional thinking about how Mr Trump’s presidency will play out needs to be completely rethought. It’s no use running off to a court to get the President’s order declared unconstitutional if the President plans on ignoring the court’s declaration. It’s no use hoping the military will place roadblocks on his latest National Security plan, because they’re no longer on the committee.

The rule book for how power is exercised in the US is currently being torn up. The question is whether what it’s replaced with will be in any way democratic.

If the Republicans in Congress try to block Mr Trump from getting his way on something, he’s likely to just go around them. If the past two weeks are any guide, the conventional institutions are unlikely to provide much of a buffer from a President intent on ignoring them.

In the meantime, Mr Trump will continue to build parallel institutions, that mean that should the support from all the institutions evaporate, he can still carry on.

Consider this: Mr Trump has retained his own private security, rather than relying exclusively on the Secret Service. Indeed, the man who has been head of security for 15 years, Keith Schiller, is now the head of Oval Office operations. This has never happened before. The US Secret Service has an institutional imperative to protect the President, regardless of what happens.

Of course, if all the institutions did turn against President Trump, and it became murky about who the legitimate President was, who knows how the US Secret Service would react. Which makes having your own people on the ground quite useful, doesn’t it?

Charles Firth majored in Economic (Social Science) at Sydney University. He is also editor of The Chaser Quarterly. Follow him on Twitter @charlesfirth