The Earth is like a giant porous ball. Rain comes down, filters through the ground and ends up in aquifers and streams.

Cows urinate in a field and a diluted version ends up in the rivers.

Now, under the soil is compressed soil (rock). There are gaps in the rock due to excavation, mining, earthquakes etc. Water goes into those cracks. Equally, water and gas can come out of those cracks – it depends on which side is under more pressure. Gravity on the water, compression on trapped gas wanting to get out.

Currently, we have an equilibrium, where gasses are underground but in pockets where the exterior rock is so tightly compressed, the gas can’t get out. Like a glass jar. Any ‘loose’ gas left thousands of years ago.

If we break the container to get the gas out (Fracking) then it not only escapes into the pipe but out through the cracks in the ‘glass jar’. Then into the aquifers, streams, atmosphere etc. This is why water in the tap can be used to cook with – it’s flammable. 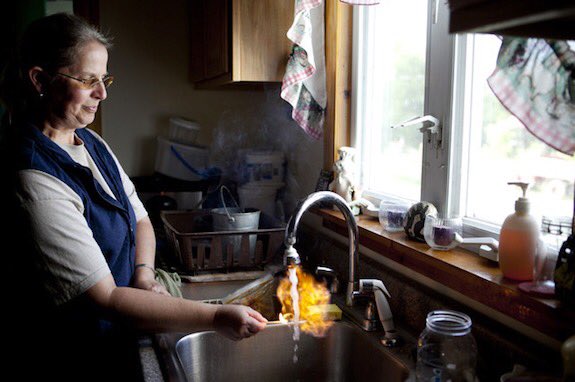 So now, the streams are polluted, the drinking water for animals and people is contaminated.

Then we get to the ‘Even worse’ part.

The barium, bromide, calcium, chloride, sodium, lithium and strontium they injected to get the rock to break ends up in the aquifers and streams. These elements are so bad for the environment, no waste facility will take them. They are the sort of chemicals you find in cellphone batteries and those pictures of kids mining in the Congo. Kids who won’t make it to 10 because of the toxicity.

The microbes that have been “dramatically altered” by the chemical cocktail (These are what feed your fish and livestock).

Because the whole world is one puzzle of pieces held together, ALL the parts become contaminated through water and chemicals travelling through the cracks. Ever tried to hold a broken cup together so you can have a cup of tea?

and that’s why fracking CANNOT, EVER, work.