Iceland’s historic progress to the knockout stages of Euro 2016 has boosted the small nation’s confidence, to the point that an Icelandic holiday firm has offered free tickets for a whale-watching day-trip to the tournament’s “next losers” – England.

Iceland will face England in the knockout stage of Euro 2016 next Monday after securing a place in the last 16 thanks to a 2-1 victory over Austria on Wednesday – with the entire championship being somewhat of a fairytale for Icelanders so far as their team makes its first appearance at a major tournament.

The team’s remarkable progress has not been lost on North Sailing manager Gudjartur Jónsson, who has offered the England team – presumed to be the next victims of the country’s progress in the tournament – a free whale-watching trip as means of compensation for their predicted exit.

Jónsson told the Guardian that a free day out in Húsavík, northern Iceland, was meant to be “a bandage for wounded pride, after the loss against Iceland this coming Monday.” 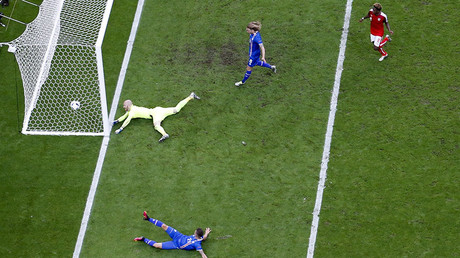 “It is only polite and a part of the Icelandic hospitality culture to offer the free tickets,” he explained, posing with 23 complementary tickets for the England team.

“The poor English players will anyways not be able to return immediately to England after the match on Monday, as 60 million English football fans will be furious when losing to a small island state with only 300,000 inhabitants.

“Therefore we offer a peaceful day with whale-watching in a small town in northern Iceland with beautiful nature and nice people. That should be the perfect compensation,” Jónsson added.

For a country of fewer than 350,000 people, Iceland has been performing well in the tournament, having drawn with Portugal and Hungary before beating Austria, placing them second in their group.

“Our national holiday is on June 17,” Iceland coach Helmir Hallgrimsson said after the 2-1 victory against Austria on Wednesday. “I guess we need to change it now. That’s what this means to us,” he added, Reuters reported.